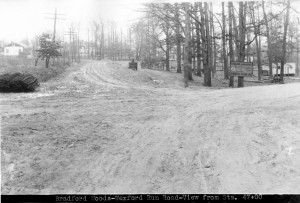 Bradford Woods, originally settled as a summer getaway, was incorporated as a borough on May 3, 1915, from Marshall Township. The Pittsburgh, Harmony, Butler and New Castle (Harmony Line) interurban railway previously ran through Bradford Woods, where Forest Road is today. It provided a direct route to Pittsburgh, PA. A home rule government was established in 1974.